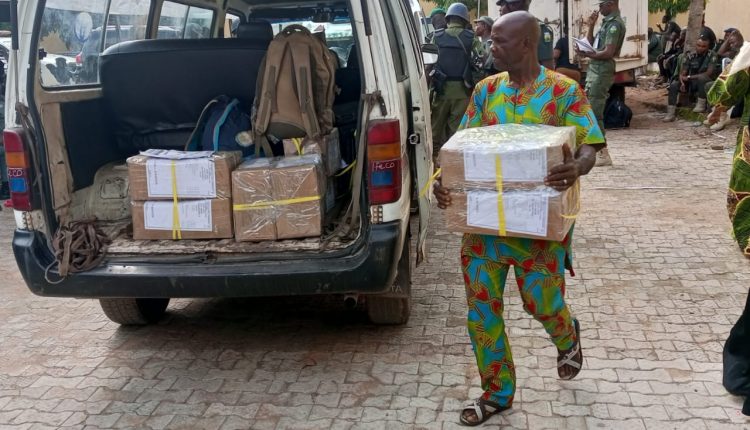 Ahead of the June 18 governorship poll in Ekiti State, the Independent National Electoral Commission has commenced the distribution of sensitive materials to the 16 local government areas of the state.

Fully armed security personnel cordoned off the commission’s office located at the new Ado-Iyin road in Ado-Ekiti, the state capital, where the materials were distributed and frisked those entering the place.

When our correspondent visited the area, several personnel of security agencies, including the Nigerian Police, Nigerian Army, Security and Civil Defence Corps and Department of State Services were on guard.

All adjourning roads leading to the INEC headquarters were cordoned off with six armoured personnel carriers positioned at strategic locations and at the entrance of the office.

The sensitive materials were loaded into the vehicles under a water-tight security for onward transportation to the 16 local government areas with parties agents in attendance.

The materials, which were handed over to the local government areas electoral officials, were arranged and customised according to each local council in the state.

Speaking to journalists on Thursday, the INEC boss said the commission was prepared to conduct free, fair and credible election in the state that would adhere with best international standard.

Tella said the distribution showed INEC’s readiness to deliver a governorship poll that would be acceptable to all political actors, adding the timely distribution of materials was key to the success of the elections.

Tella added adequate security personnel have been provided to ensure that the sensitive materials reached the desired destination safely.

“So, following the assurances from the security agencies, we are good to go on Saturday and it will be a standpoint in the country’s electoral process”