New Delhi: When Instagram recently took down a video of Uttar Pradesh resident Prabhakar Maurya worshipping a statue of state chief minister Yogi Adityanath, posted by the satirical anonymous account ‘Superhumans of Cringetopia’, it said the post violated the platform’s ‘nudity and sexual content’ guidelines. That was strange – both the man and the idol in the video were fully clothed, and there was no visible sexual connotation whatsoever.

At the time, the administrators of the @cringearchivist handle – who refer to themselves as a group of academics and journalists – assumed that there was a mistake in the platform’s AI-run oversight mechanism, which had incorrectly flagged the post as portraying nudity. 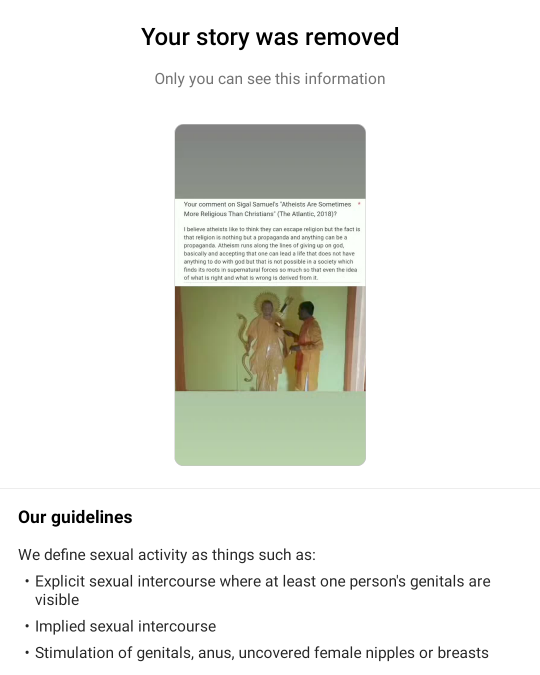 Email from @cringearchivist: Post satirising Yogi Adityanath’s temple with a response we recorded in membership form which was critical of religion. Deleted for “sexual activity/nudity”. It is interesting to note that all these removals were immediate (<~2 minutes after posting).

Days after reporting on this confusing takedown, The Wire has learnt from a well-placed source at Meta that it was not, in fact, due to an algorithmic glitch. The post was taken down – and that too just minutes after it was posted – only because it was reported by Instagram user @amitmalviya. That’s the handle belonging to Amit Malviya, president of the Bharatiya Janata Party’s infamous IT Cell.

The internal Instagram report, which The Wire has accessed, makes clear that the reported post was taken down immediately without any of the company’s moderators looking at it, based simply on the identity of the reporter (Malviya). In fact, any post that Malviya reports is treated the same way – an immediate removal from the platform, no questions asked. Just in the month of September, the Meta source told The Wire, Malviya reported 705 posts on Instagram – all of which were taken down.

As The Wire has reported, @cringearchivist has seen seven of its posts removed by Instagram in the last few months. This, the administrators of the satirical account said, has forced them to go ‘private’ (only followers can see their posts), thereby limiting their growth and reach. Now, new followers have to fill a form before they are allowed to see the content posted on the page.

Other removed posts from the @cringearchivist page, The Wire has now learnt, were also reported by none other than Malviya. While two were flagged for sexual content – the post on the Adityanath temple and another that amplified the voice of a female influencer who was posting about creepy DMs she got – the rest were taken down citing ‘extreme graphic violence’, despite the videos not showing violence. Instagram’s rate and speed of takedowns had worried the handle’s administrators, who thought their page in its entirety may be deleted if this continued.

Meta is Instagram’s parent company, which also runs Facebook and WhatsApp. Malviya, the Instagram report on the @cringearchivist post states, is part of Meta’s ‘XCheck’ or ‘Cross Check’ program. This program – a closely guarded company secret until it was first exposed by the Wall Street Journal in September 2021 – allows a list of ‘elite’ accounts on Meta platforms (belonging mostly to celebrities and politicians) to flout the rules the company claims apply to everyone under the garb of protecting these high-profile users. The programme was designed to prevent the bad press that sometimes came from action against celebrity users.

“Some users are “whitelisted”—rendered immune from enforcement actions—while others are allowed to post rule-violating material pending Facebook employee reviews that often never come,” Wall Street Journal reported then. The Instagram report on the @cringearchivist posts that were removed makes it clear the XCheck privileges are even more sweeping – these users can also have posts taken down as they please, without the company bothering to check whether there is justifiable cause.

The XCheck program was criticised even within Meta, with an internal review finding, according to the Wall Street Journal, that “Unlike the rest of our community, these people can violate our standards without any consequences.” According to the newspaper, the company planned to do away with this ‘whitelisting’ process by the first half 2021. We’re now in the latter half of 2022 – and the Malviya-@cringearchivist case confirms that XCheck users continue to enjoy privileges that undermine the rights others have on Meta platforms.

Globally, according to the Wall Street Journal, 5.8 million users were a part of the XCheck program in 2020. Users are not typically told when they are included in this privileged list, the newspaper noted. While some of the names revealed by the newspaper were celebrities with hundreds of millions of followers, like the Brazilian footballer Neymar, Malviya has less than 5,000 followers on Instagram and 15,000 followers on Facebook. It is his membership and role in India’s ruling party, then, that probably landed him in the XCheck list, rather than Meta thinking his voice is important for others on the platforms.

Meta never publicly revealed the existence of these XCheck accounts, and while investigations have brought out certain names from different parts of the world, the program’s use in India has so far remained unknown. The document accessed by The Wire confirms that Malviya falls within this bracket of users given preferential treatment in India – the first such name to come out of South Asia. “Skipped auto moderation. Reason: Reporting user has XCheck privileges,” Instagram’s internal report on the bizarre takedown of the Adityanath temple video says. “Review not required. Reason: Reporting user has XCheck privileges,” it continues.

The internal report makes clear that after Malviya reported @cringearchivist’s post, no human intervention was deemed necessary by Meta – the post was gone from the platform immediately, and no review process was seen as “required”.

Malviya has a much discussed track record of posting false information and incendiary comments. In 2020, for example, Twitter publicly flagged one of his posts as including ‘manipulated media’. That, somehow, does not seem to be enough to disqualify him from Meta’s preferential treatment list.

The company has given Malviya two levels of privileges – he can post as he likes, without the rules governing the platform applying to him, and he can impose his will as he pleases to have posts critical of the BJP, the Union government, or right-wing Hindu politics, deleted.

For someone who regularly uses social media for disinformation – for instance, last month posting photos from 2019 while claiming that they portrayed a recent Narendra Modi rally, or alleging that a recent New York Times’ article on the Delhi government’s education programme was a ‘paid promotion’ – a privilege like this underlines that general users’ best interests aren’t Meta’s priority here. Because while the rest of us may not be able to get away with performing such a tenuous relationship with the truth on Meta platforms, or refusing to let any dissent or criticism exist, Malviya sure can.

Note: If you think your Instagram post may have been reported by an ‘XCheck’ user and was removed without moderation, email us at thewirein@proton.me