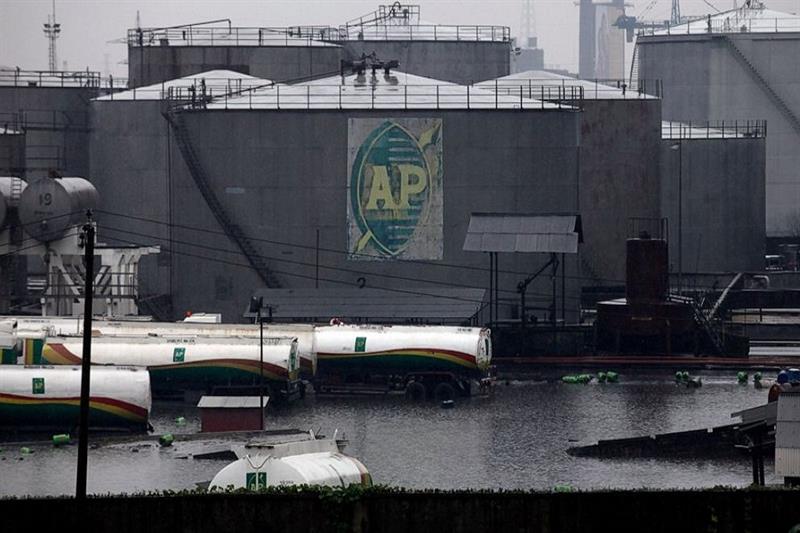 File Photo: A tank farm and oil trucks are half submerged after a downpour at an oil terminal in Lagos Nigeria, in July. 11, 2011. AP

Nigeria LNG Limited, or NLNG, declared a “force majeure“ this week, meaning it is unable to fulfil its contractual obligations to supply the fuel used around the world to generate electricity, heat homes and run factories after flooding led to a “significant disruption of gas supply.”

Andy Odeh, spokesman for NLNG, said Thursday that the company’s plant is “still in operation though at a limited capacity, due to reduced gas supply from some of its upstream gas suppliers.”

The company is “working with all critical stakeholders on mitigating the impact on product deliveries,” he said in a statement, without providing more details on exports.

The NLNG is a joint venture between the Nigerian government, which is the majority shareholder, and energy giants including London-based Shell and Italy’s Eni.

With the capacity to produce over 20 million tons of liquefied natural gas, or LNG, per year, it is Nigeria’s largest gas firm, but its production capacity was only at 68% because of oil theft and pipeline vandalism that has plagued the country.

As Europe faces an energy crisis after Russia sharply reduced natural gas flows during the war in Ukraine, Nigeria and other African countries have agreed to work toward helping meet the European Union’s need for increased gas supplies.

Nigeria has Africa’s largest natural gas reserves, but its capacity to meet such demands has come under question, even as European storage levels have managed to reach 92% ahead of the winter heating season and gas prices have fallen lately.

Flooding this year _ the worst in a decade _ has killed more than 600 people, displaced 1.3 million and “aggravated what was already a bad situation” for the national gas company, said Toyin Akinosho, a Nigeria energy consultant.

Floodwaters also have submerged many of the riverside communities in the oil-rich Niger Delta region where Nigeria’s crude oil facilities are located, threatening the operation of local and international oil companies. Nigeria is a member of the OPEC oil cartel that produces crude for world markets.

Akinosho expressed doubts about how quickly the disruption could be addressed to allow Nigeria to resume shipping gas to the EU, which gets 14% of its LNG imports from the African nation, as well as other buyers in North America, the Middle East and Asia.

Analysts fear that if the disruption in gas supplies persists, it would cause a further decline in government earnings at a time when Nigeria faces a cash crunch caused by declining crude production over the years.

The force majeure may “cause the NLNG markets to tighten further” before winter when it faces higher demands for gas, said Olufola Wusu, an oil and gas expert who was part of a team that helped review Nigeria’s national gas policy.

“The chances are that if we are unable to meet local demand, it is highly unlikely that we will have sufficient gas to export. And it means that some of our customers may be forced to seek LNG from other suppliers,” Wusu said.

A spokesman for Timipre Sylva, Nigeria’s petroleum minister, declined to speak on the issue.