Bradley Ray claimed his third race win of the 2022 Bennetts British Superbike Championship season, delivering a masterful performance at Knockhill to take the chequered flag in the eBay Sprint Race ahead of Jason O’Halloran and home hero Rory Skinner.

Ray had set a lap record-breaking pace to claim pole position and the Rich Energy OMG Racing Yamaha rider was determined to return to winning ways after fighting back from a crash yesterday.

Ray got off to a flying start and despite the initial pressure from the chasing pack, he kept his cool to break his rivals and extend his lead at the top of the championship standings.

The battle for the final podium positions were intense as O’Halloran dived into second on the opening lap ahead of Skinner and Danny Buchan, who split the Cheshire Mouldings FS-3 Kawasaki teammates.

Kyle Ryde was also in the battle in the earlier stages of the race, but Skinner was instantly on the attack and moved ahead of the McAMS Yamaha rider on the second lap.

The Australian fought back and soon had regained the position as Ryde then moved into third place ahead of the Team Green teammates as Skinner and Lee Jackson tried to regain the positions.

Skinner was determined and with six laps remaining, he had regained third place but O’Halloran had bridged a marginal gap in second place and he would hold it until the finish.

Skinner’s third place wasn’t safe; he was coming under intense pressure from his teammate as he continued to trade positions with Jackson over the final laps. However, it was the local contender, who returned to the podium for the first time since the season opener, claiming a hard-fought third place ahead of Jackson.

Danny Buchan had managed to get ahead of Ryde to snatch fifth place with Glenn Irwin holding off Tommy Bridewell for seventh.

Storm Stacey had his best finish of the season so far in ninth place for Team LKQ Euro Car Parts Kawasaki as Josh Brookes completed the top ten.

Defending champion Tarran Mackenzie was sidelined from the eBay Sprint race following a high-speed crash in the opening stage of this afternoon’s SUPERPICKS Qualifying session. The McAMS Yamaha sustained heavy damage in the crash and so he will be back in action tomorrow. 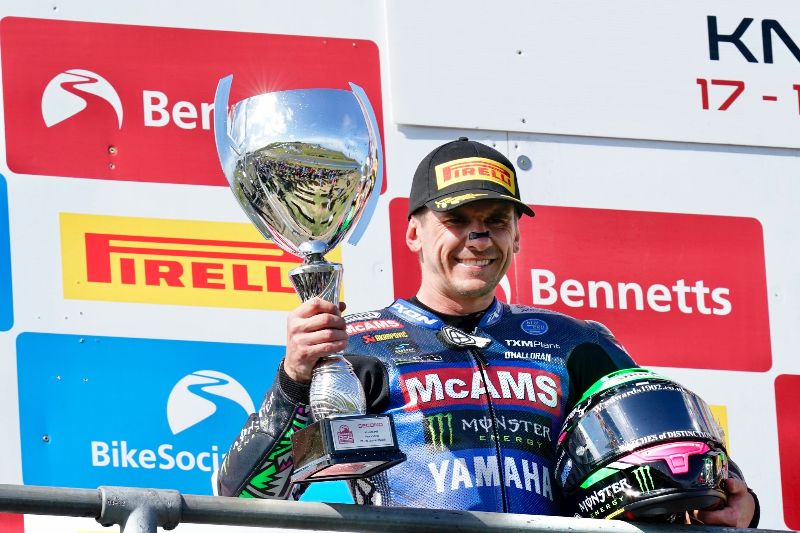 “That was a bit of a strange race for me to be fair; I set off at the start and I hadn’t planned on leading from start to finish! I just wanted to get my head down at the start and took it quite steady over the first few laps and I set a pace I was comfortable with and I didn’t feel near the limit.

“I got to about lap 12 and I had pulled about 0.5s and I thought it was the time to make a gap if I could. I managed to put in some strong laps and it meant I could pull a bit of a gap.

“I am super happy with the bike, especially after the lack of track time after missing the test and the crash yesterday.

“I would say this has been my best win of the season so far because of that; the other guys had laps under their belt from testing and I only had five laps yesterday so I only had today to get up to speed today.

“I am over the moon to bring the win home for Rich Energy OMG Racing Yamaha.”