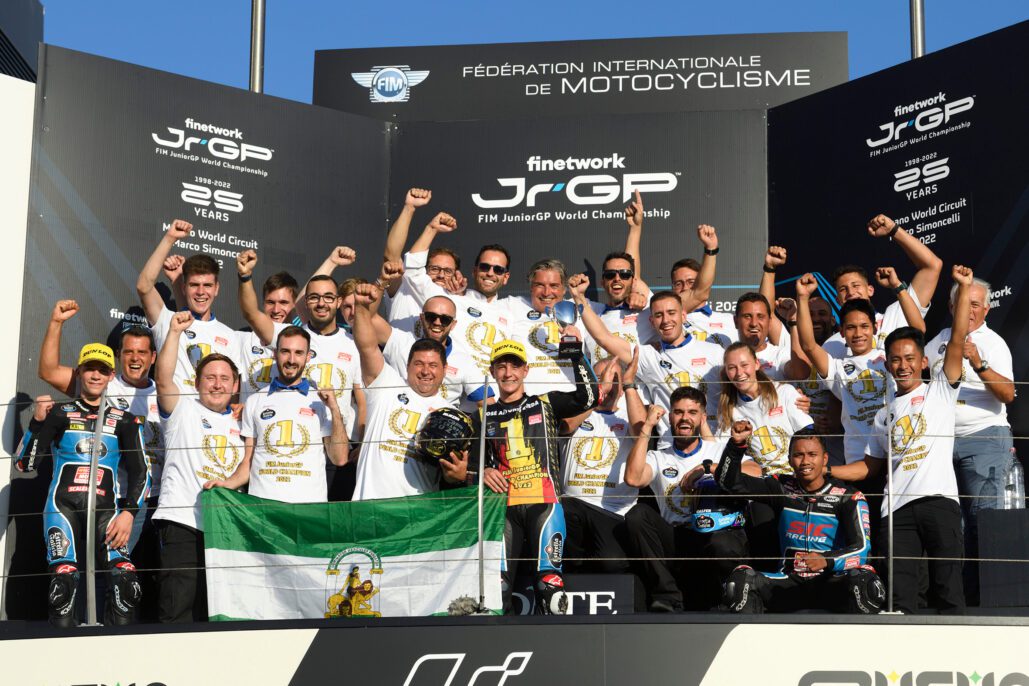 Second was good enough for the Spaniard to wrap up the JuniorGP™ title in a manic Misano clash.

Laglisse Academy’s David Salvador bagged the holeshot from his debut pole position but was quickly put under threat by the form man, Rueda. The Spaniard hit the front on Lap 2 and looked to assert his dominance, but his closest title rivals wouldn’t allow him to escape. Instead, a group battle commenced as the JuniorGP™ put on a show alongside the MotoGP™ World Championship.

The laps ticked by with Rueda leading the way before an uncharacteristic error from the Championship leader with 12 remaining handed the advantage back to Salvador. His mistake at Turn 13 also allowed teammate Angel Piqueras (Team Estrella Galicia 0,0) to squeeze through into second. Piqueras would then pounce on Salvador into the opening corner to hit the front for the first time.

The 15-year-old Valencian was visibly pushing to the limit, exceeding track limits on consecutive laps at the exit of Turn 10. He was given a track limits warning before then running well wide for a third time, on this occasion at the penultimate corner, to earn himself a Long Lap Penalty and hand the lead over to Husqvarna’s Salvador.

With four laps remaining and now Rueda leading the way, Piqueras dived into the Long Lap Penalty loop and rejoined back in ninth. At the front, Farioli had been dropped to fifth following an error of his own. However, he started to battle back through with three laps left, first getting the better of Adrian Cruces (Cuna de Campeones) at Turn 10. He then squeezed up the inside of Syarifuddin Azman (Team Estrella Galicia 0,0) moments later at Turn 14 to put himself right in contention for the win.

Just two laps were now left when Farioli hit the front for the first time thanks to a perfectly executed move. He came on to the start finish straight in third before getting on the gas, putting his GASGAS to good use and slip streaming his way in front of both Rueda and Salvador before they braked into the opening corner. Piqueras by this time was seventh and just a second adrift of the leading six thanks to a new fastest lap of the race.

Farioli lead the front group out of the final corner for the penultimate time with Salvador ready to attack in second and Rueda looking set to be crowned King in third. Piqueras, meanwhile, had somehow battled through to fifth and was right in the hunt for a podium finish. Rueda, not happy with settling for third, braked late into Turn 8 and found a way through on Salvador, but the pair went wide to allow a hard-charging Piqueras to come alongside them. The trio were three abreast on the brakes into Turn 10, with Rueda coming out on top to sit second.

Farioli kept his composure in the final sector to take the chequered flag and a debut JuniorGP™ victory by just 0.035 of a second. Rueda missed out on a sixth win of the season but cared not one jot as the Sevilla native wrapped up the 2022 Finetwork FIM JuniorGP™ World Championship. Piqueras’ remarkable recovery ride was completed by coming across the line in third.

Salvador in the end was forced to settle for fourth, ahead of AC Racing Team’s Luca Lunetta and Malaysia’s Azman. Completing a top seven split by only three quarters of a second was Spain’s Cruces. Honda Racing Thailand’s Tatchakorn Buasri crossed the line in a lonely eighth place, before the the top ten was rounded out by Alberto Ferrandez (Finetwork MIR Racing Team) and Jakob Rosenthaler (Liqui Moly Intact GP Junior Team).

Not long to wait for your next dose of JuniorGP™ action as the paddock heads to MotorLand Aragon next weekend with plenty still to be decided. Salvador, Azman and Farioli are split by just three points in the fight to join Rueda on the Championship podium, whilst both the Hawkers European Talent Cup and the Moto2™ European Championship will be back on the bill.

You can also find all the results, videos, photos and information regarding the championship on the official website: www.fimjuniorgp.com/en