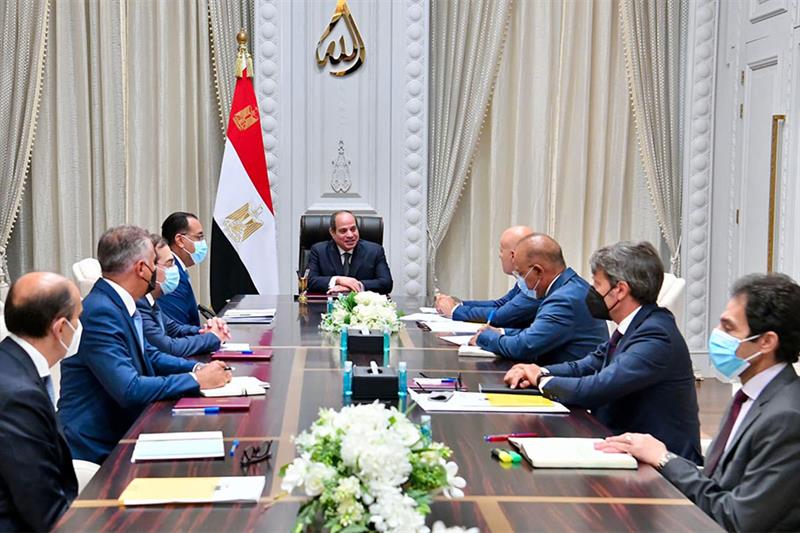 El-Sisi made the remarks in a meeting on Tuesday with CEO of Eni Claudio Descalzi, which was attended by Prime Minister Mostafa Madbouly and Petroleum and Mineral Resources Minister Tarek El-Molla.

During the meeting, El-Sisi expressed his aspiration for Eni to continue its activities in research and exploration in order to ensure the optimal use of Egypt’s energy resources, presidential spokesman Bassam Rady said.

The meeting tackled Eni’s current and future activities in the country, which involve exploring for and producing natural gas and petroleum. It also tackled cooperation in renewable energy projects in a way that helps Egypt become a regional energy hub.

Descalzi said his company is happy to be cooperating with Egypt, and that the explorations conducted in recent years have had a profound impact on the speed of the company’s success in producing natural gas, making Egypt one of the region’s major energy producers amid a severe global crisis in this area.

During the meeting, Minister El-Molla reviewed the progress in Eni’s various projects in Egypt, especially production from the Zohr natural gas field as well as liquified gas exports from liquefaction stations in Beheira’s Edku and Damietta, which are currently operating at full efficiency.

Eni’s CEO also reviewed his company’s plan to cooperate with Egypt in the renewable energy sector. This cooperation involves establishing several joint projects to produce about 10 gigawatts of electricity in accordance with Egypt’s green transformation strategy.

Earlier in March 2022, El-Sisi held a meeting with Descalzi where he encouraged Eni to continue its exploration work in Egypt.

Eni, which has been present in Egypt since 1954, is currently the leading oil and gas producer in the country, producing the equivalent of 360,000 barrels of oil per day.

In recent years, Eni has taken part in important oil discoveries in the country’s Western Desert and has operated gas plants, as Egypt aims to become a regional energy hub.

In 2015, the Italian company discovered the giant Zohr gas field – the biggest-ever discovered in the Mediterranean – which holds an estimated 30 trillion cubic feet of gas.