The NAHCON intervention in Nigeria’s diplomatic profiling, By Tunde Akanni 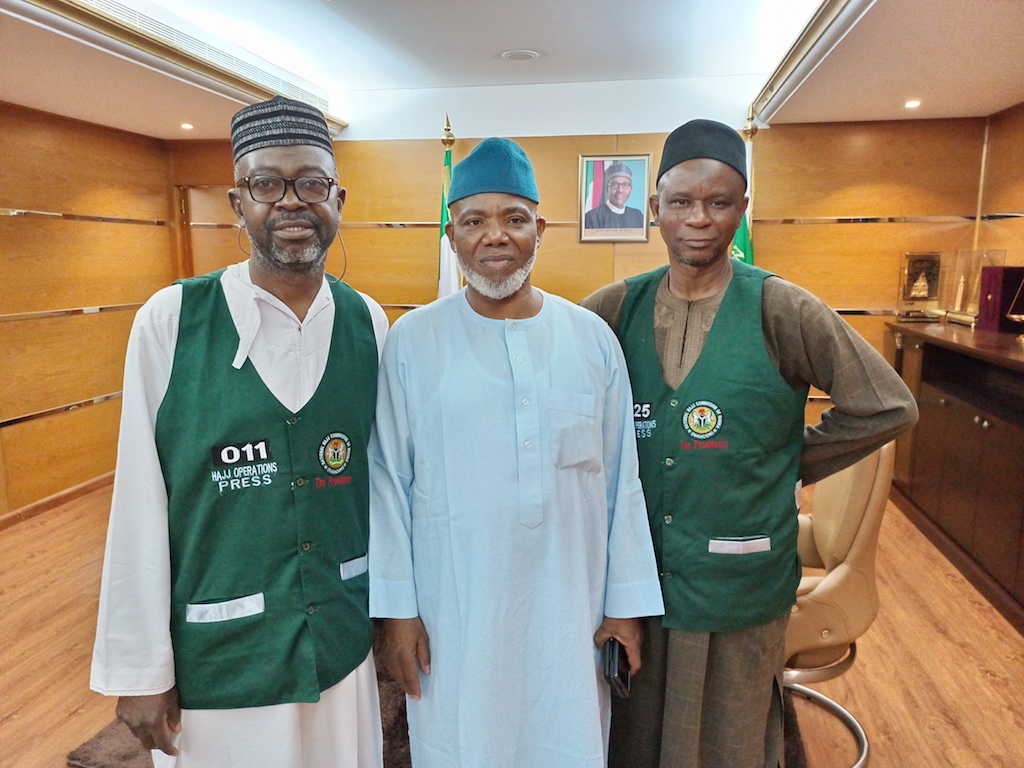 In the course of my repeated visits to the the holy masjid, I got to appreciate the quality of the vision and taste of the new NAHCON leadership headed by the tested, trans-generational leader, Zikrullah Hassan, as hinted on the first day of arrival. That hotel for NAHCON officials presented a spectacular signpost for all Nigerian pilgrims. It’s been so visible to locate and can be used as a landmark to determine the location of hotels of the pilgrims of all Nigerian states.

Together with over four hundred other pilgrims from Lagos and Abuja, we made it, with great sense of gratitude to Allah, into the King Abdul Azeez International Airport on July 5.  We were so much grateful because just as we were about flying out of Lagos, there was a loud shout to the medics in the aircraft to quickly show up for some emergency. One of us potential pilgrims, a middle aged person from Lagos State, had a failing health. She was promptly surrounded by medics and others alike for sundry support. Her lower limbs were too weak to support her upper trunk. Her dropping head pitiably betrayed a failing neck as medics tried to work her up. This unpleasant inside-aircraft incident went on for more than 30 minutes but no one was in a hurry, as we all wished she would bounce back to endure the six-hour journey. She didn’t. She had to be helped to disembark.

The Jeddah pilgrims’ arrival point secured by the National Hajj Commission of Nigeria (NAHCON) for Nigerian pilgrims, offered inexhaustible yet refreshing facilities, as we had all we needed to bath and don our Ihram, so that we could head straight to the Holy Masjid Haram in Makkah for the first leg of the holy pilgrimage. Just before the walk to Haram from our hotel, we had to drop our light bags – muslim pilgrims advisedly travel light. Nema Mawadda Hotel was to be my abode and that of my eight media colleagues from Lagos.  Accommodation fixing over, we hastened to the Holy Mosque with the relentless chant of Labaykalahuma Labayka…

Back at the hotel after the initial rites at Haram, not a few of the officials in the same aircraft with me were excited by the facilities broadly described as a clear departure from the past. One of them volunteered: “The hotel for officials used to be like a school dormitory with mattresses on the ground without basic adornments for comfortable sleep. That way, you’re immediately made to fully activate your senses for the hajj season’s characteristics of endurance, patience and tolerance.”

Really for me, it’s been a reasonably fair Makkah accommodation since I started performing hajj many years back, dating to 1990s. From our Nema Mawwada Hotel on Ibrahim El Khalil Street to Masjid Haram is barely 30 minutes of healthy trekking on well paved road side-walks. What with the beckons from both left and right of generous givers of refreshments, including full meals to pilgrims? On my first day, I had assorted offers, including a full meal with chicken. I had barely savoured that when my friend and colleague, Mikhail Mumuni, ex-Tell editor, threw a joke bothering on culinary adventure, saying he would like to look for a place to get shawarma. Pronto, a guy sauntered to our side and handed out just that and for free! Allah Akbar, we both chorused!

In the course of my repeated visits to the the holy masjid, I got to appreciate the quality of the vision and taste of the new NAHCON leadership headed by the tested, trans-generational leader, Zikrullah Hassan, as hinted on the first day of arrival. That hotel for NAHCON officials presented a spectacular signpost for all Nigerian pilgrims. It’s been so visible to locate and can be used as a landmark to determine the location of hotels of the pilgrims of all Nigerian states. All one needed to do was to ensure entering Haram via Gate 79, otherwise referred to as King Fahad Gate. When you are also done at the most expansive, mega masjid, endeavour to locate the two wide roads separated by the ultra modern, underground toilets – one for men and the other for women – to find your way home. El Khalil Street is a household name in Makkah.

Away from Haram into the street, a highway actually, you’re tempted to look into shops of assorted wares adorning the ground floors of many hotels occupied by the pilgrims from different countries. The line up of the hotels is a reminder of the situation in Joa Pessoa, a northwestern beach city in Brazil, which played host to the 2016 edition of the Internet Governance Forum (IGF), the global convergence dedicated to discussing Internet and all related issues. In Makkah at night, billowing flags of the countries whose pilgrims stay in each of the hotels become more visible as they unfurl as if in cautious dance for the festive month of Dhul Hijjah as a special month.

To head in the direction of where Nigerian pilgrims are concentrated, there are three overhead bridges and a set of three twin, big, blue coated road sign boards between Haram and our own Nema Mawadda Hotel. The first bridge welcomes you to the feet of the marbled staircase descending from the platform of the vast male and female washrooms.

As you gradually head into ‘Nigerian quarters’, right before the second bridge there is often a preponderance of pilgrims from Turkey, with their national emblem all over what they wear and carry. But Hajj being an inimitable facilitator of the convergence of races, here to your right is the Palestine Hotel occupied obviously by the pilgrims from Palestine. A massive, yet glittering structure parades invitingly set tea tables and chairs for hotel occupants outside of its lobby. You can then imagine the allure of the elaborately furnished lobby with conspicuous expression of hospitality.  Pilgrims from Turkey and Palestine happily bid bye to colleagues from other countries going further to their respective hotels, with repeated greetings of salaam, the short form of Asalam alaykum warahmatulah wabaaraka tuh.

Shortly after the bridge is the hotel occupied by pilgrims from Bangladesh. It isn’t any less attractive than the one for the Turkey pilgrims. Indeed, one recurrent feature of all cadres of facilities here is the adherence to the use of best quality materials in the face of a tough, indeed hard to conquer, hilly environment. Behind each of all the hotels are huge mountains but the hotels too appear to be in competition with them in height, in addition to flaunting extremely beauteous architectural designs hardly available in other parts of the world I have been, including the US, UK, Netherlands. Dubai is probably next in parading such spectacles. If you function in environments like tertiary institutions where architects are supposed to indulge patrons with their expertise but fail to so do, Saudi hotels will make you think of such architects as criminals. Towering structures everywhere flaunt indescribably detailed aesthetics.

As I went further to see hotels for Indonesians and Pakistanis, the hotels for Turkey and Bangladesh pilgrims readily reminded me of Nigeria’s membership of D8 countries, whose current executive secretary, Isiaka Abdulqadir Imam, is a Ngerian, and a veteran of diplomacy who used to be Nigeria’s ambassador to Brazil. D8, otherwise called Developing-8, is an organisation for development cooperation among Bangladesh, Egypt, Indonesia, Iran, Malaysia, Nigeria, Pakistan and Turkey. Its secretariat is in Istanbul, Turkey. Our hotels share the same street, as if EL Khalil Street is D8 Street. Nigeria therefore ranks impressively with the choice of location, especially as I later learnt that the new NAHCON leadership did what was humanly possible to get a far better rate of accommodation for pilgrims this year, just that the global dollar ranking has not spared our naira. Several other currencies, including those of strong economies, like yen and euro have not fared better in recent time.

Beyond enabling Nigerian pilgrims to rub shoulders with those of Turkey and Bangladesh, Europe’s fastest growing economy and the world’s largest producer of garments respectively, the NAHCON leadership finally seized a golden moment for us all when the hajj administrators of African countries had to meet with the Saudi authorities to review this year’s hajj. NAHCON Chair, Ustaz Zikrullah Hassan spoke on behalf of all Africans to the appreciative audience. The honour for Nigeria, most recently heightened by athlete Tobi Amusan was palpably perceived at the beautiful event in Makkah.

The honour that came the way of the NAHCON boss, Hassan, was well prepared for. His charity began at home. The previous week, he had set up a most transparent Hajj 2022 review session for select stakeholders, also in Makkah, where issues though critically discussed still earned him plaudits. The lesson: Colleagues from within and without can only accord you honour if only you’re self-respecting. Hassan earned his!

Tunde Musibau Akanni, Associate Professor and Head of Journalism Department at LASU, is a member of the National Media Committee of Hajj 2022

Good journalism costs a lot of money. Yet only good journalism can ensure the possibility of a good society, an accountable democracy, and a transparent government.

For continued free access to the best investigative journalism in the country we ask you to consider making a modest support to this noble endeavour.

By contributing to PREMIUM TIMES, you are helping to sustain a journalism of relevance and ensuring it remains free and available to all.