KYIV, Ukraine (AFP) — The United States warned Tuesday that Russian President Vladimir Putin was ready for a long war in Ukraine and will not stop at the eastern Donbas region where fighting is currently raging.

Washington’s bleak prediction came as Ukraine said its membership in the European Union was a question of “war and peace” for the whole continent as it faces down Moscow.

As it battled Russian attempts to advance in the east, Kyiv hailed what it said was EU powerhouse Germany’s change of stance on a Russian oil embargo and on supplying arms to Ukraine.

Violence still raged in southern Ukraine with overnight missile strikes in the port of Odesa, while officials said some 1,000 troops were trapped in the Azovstal steelworks in the devastated city of Mariupol.

Russia invaded Ukraine on February 24 but Ukrainian forces managed to push Moscow’s forces back from Kyiv, and the conflict is now well into its third month.

Putin gave few hints on his plans in a speech during a huge military parade in Moscow on Monday, saying only that Russian troops were defending the “Motherland” and blaming the West for the conflict. 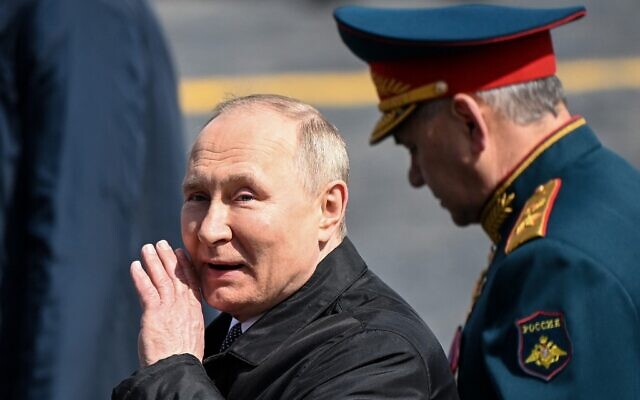 But US Director of National Intelligence Avril Haines said Tuesday that Putin will not end the war with the Donbas campaign and is determined to build a land bridge to Russian-controlled territory in Moldova’s breakaway Transnistria region.

US intelligence also views it as increasingly likely that Putin will mobilize his entire country, including ordering martial law, and is counting on his perseverance to wear down Western support for Ukraine.

“We assess President Putin is preparing for prolonged conflict in Ukraine during which he still intends to achieve goals beyond the Donbas,” Haines said. 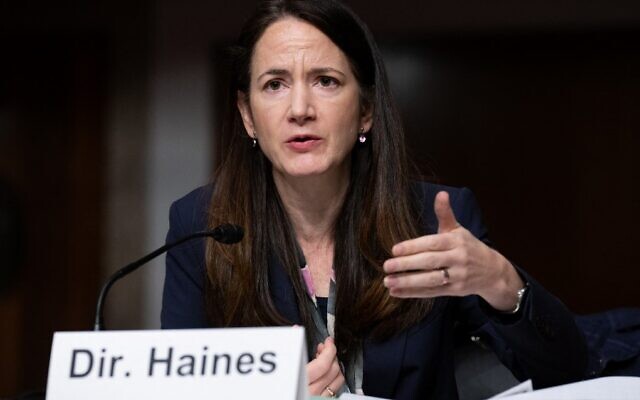 Director of National Intelligence Avril Haines testifies about worldwide threats during a US Senate Armed Services Committee hearing on Capitol Hill in Washington, on May 10, 2022. (Saul Loeb/AFP)

Moscow switched its focus to Russian-speaking Donbas, where separatists have been fighting since 2014, after failing to take Kyiv.

Ukraine’s presidency said the “epicenter of the fighting has moved” to Bilogorivka in the Lugansk region, the site of a deadly Russian airstrike on a school on Sunday that Ukrainian officials said killed 60 people.

Shelling also continued in Ukraine’s easternmost strongholds, the sister cities of Severodonetsk and Lysychansk, it said. An AFP team had seen columns of Ukrainian trucks moving away from Severodonetsk on Monday.

Civilians were struggling to survive between the constantly shifting front lines.

“I feel total apathy. I am morally starved — not to mention physically,” said bricklayer Artyom Cherukha, 41, as he collected water trickling from a natural spring in Lysychansk. 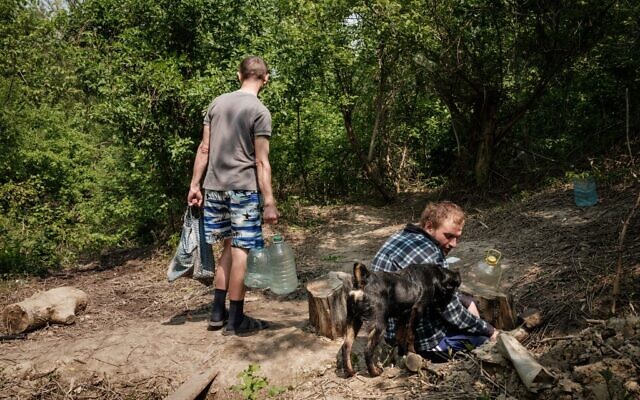 Artyom Cherukha (L), 41, leaves after collecting water at a natural spring that locals have used for generations, as well as during World War II, in a forest after water supplies across the city have been cut by the fighting in Lysychansk, eastern Ukraine, on May 9, 2022, on the 75th day of the Russian invasion of Ukraine. (Yasuyoshi CHIBA / AFP)

He was trying to get supplies for his family of nine, as people in the areas steadily lose access to water and food.

In the south, a series of missile strikes in Odessa overnight meanwhile destroyed buildings, set ablaze a shopping center and killed one person, just hours after a visit by European Council President Charles Michel.

Michel had earlier warned that vital supplies of wheat and grain that were ready for export from Ukraine, one of the world’s key producers, were stuck in Odesa because of the conflict. 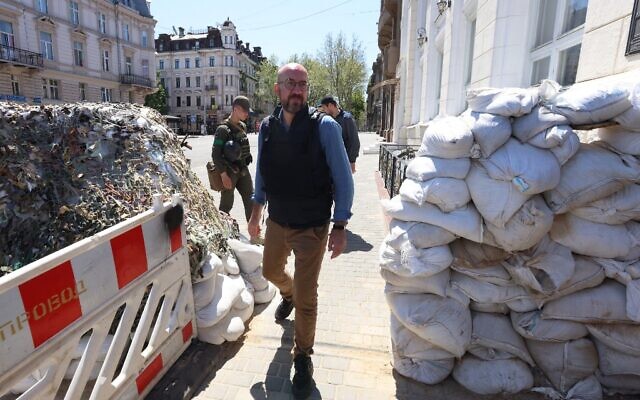 Ukraine has been pushing Western countries for more support, and has been particularly critical of Germany for its slow response and unwillingness to give up Russian energy.

But the tone changed on Tuesday when German Foreign Minister Annalena Baerbock’s surprise visit to Bucha, a town outside Kyiv where Russian troops have been accused of war crimes.

“I would like to thank Germany for changing its position on a number of issues,” Dmytro Kuleba told a press conference in Kyiv with Baerbock.

“Germany has changed its position on arms supplies to Ukraine,” said Kuleba, adding that Kyiv was also “grateful to Germany for supporting the introduction of the oil embargo” by the EU.

The Ukrainian top diplomat however pushed for the European Union to admit his country, after French President Emmanuel Macron said it could take decades for Ukraine to join. 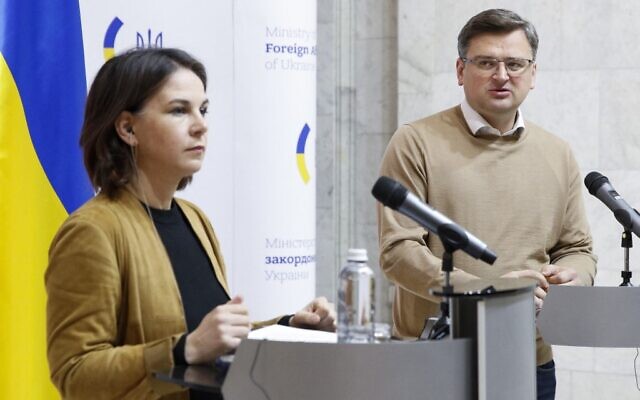 “I want to emphasize that Ukraine’s membership in the EU is a matter of war and peace in Europe,” said Kuleba. “One of the reasons that this war started is that Putin was convinced that Europe doesn’t need Ukraine.”

The German was accompanied by her Dutch counterpart Wopke Hoekstra, whose country reopened its embassy in Kyiv.

US lawmakers were set to begin debate Tuesday on a nearly $40 billion aid package, which is expected to pass comfortably with rare bipartisan support. 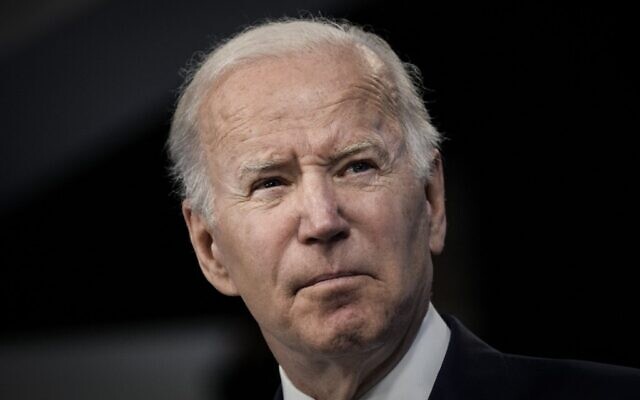 US President Joe Biden speaks about inflation and the economy in the South Court Auditorium on the White House campus on May 10, 2022, in Washington, DC. (Drew Angerer / GETTY IMAGES NORTH AMERICA / Getty Images via AFP)

Moscow has made more progress in southern Ukraine but “more than a thousand” Ukrainian soldiers remain in the Azovstal steelworks in the port of Mariupol, Deputy Prime Minister Iryna Vereshchuk, told AFP.

The plant is the final bastion of Ukrainian resistance in the city, which has seen relentless destruction since Russian President Vladimir Putin’s February 24 invasion.

“Hundreds are injured. There are people with serious injuries who require urgent evacuation. The situation is deteriorating every day,” said Vereshchuk.

Many civilians have been evacuated from the plant in recent days, as Russia pushes for full control of Mariupol to open up a land corridor from Crimea, which it seized in 2014.

Moscow said it would not participate in Thursday’s special session of the UN Human Rights Council on Ukraine. 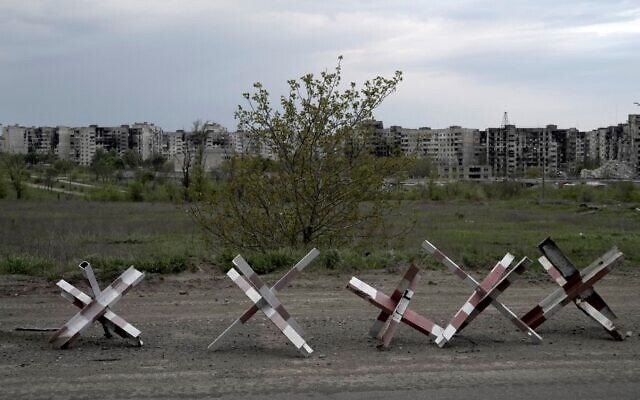 A view of the city of Mariupol on May 9, 2022, amid the ongoing Russian military action in Ukraine. (STRINGER / AFP)

The Council announced on Monday that it would hold a special session at Kyiv’s request to examine “the deteriorating human rights situation in Ukraine stemming from the Russian aggression.”

In another step forward in building pressure on Russia, EU chief Ursula von der Leyen said she made “progress” on a proposed Russian oil embargo during talks with Hungarian Prime Minister Viktor Orban.

The populist Orban is one of Putin’s closest friends in Europe and had held up the bloc’s attempt to phase out Russian oil — one of the most painful measures yet taken by the West — as he pointed to economic consequences in landlocked Hungary.

Western powers on Tuesday separately accused Russian authorities of carrying out a cyberattack against a satellite network an hour before the invasion of Ukraine to pave the way for its assault.